I'm going to jump right in to this weeks OTR Friday and try and not ramble on and on like I usually do. I don't think my attempts at astute observation help the personal discovery of the humor of Paul Rhymer for anyones enjoyment of "Vic & Sade" all that much,

So jump right in to the best show about nothing (and this is coming froma BIG Seinfeld fan here) EVER produced!

From June 24, 1940, here a story about Mr. Gumpox the trash man's friendly little habit of blowing kisses to the ladies on his route, and how it cause quite the hoopla over at the Donahue's house. Don't think anyone could fill a 15 minute show with only our 3 cast members describing something this simple that happened before the show started and all off mic? Then you haven't been listening!

And from July 1, 1940, after a stimulating game of 500 with Fred & Ruthie Stembottom, Sade reveals to Rush and Vic all of Ruthie's deep, dark secrets. Scandal in a quiet town!

For our visual feature of the week, the December 27, 1943 issue of Time Magazine. A short snippet about the show in which nothing much happens that is ravenously listened to by 7,000,000 listeners and the genius behind it. 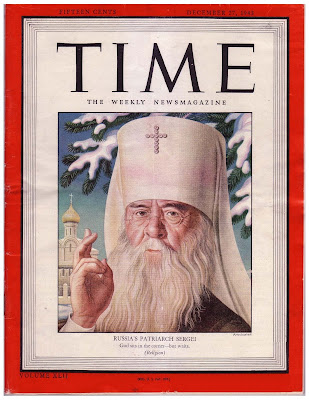 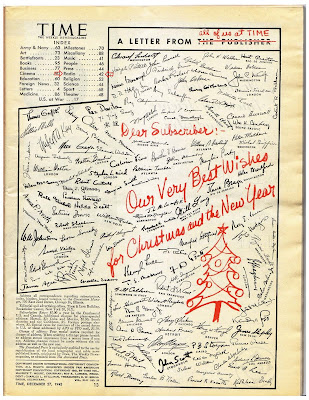 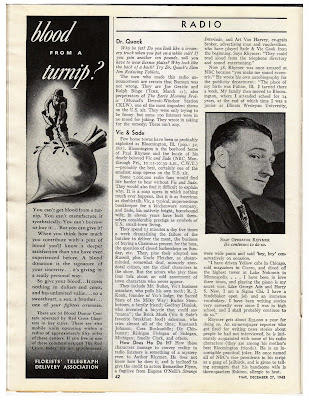 And from the same issue (this one's for you Frank), A Happy Christmas breakfast from 68 years ago. The waffles are surely bad by now but I guarantee that the Spam hasn't lost a bit of it's gelatinous, un-porcine texture. Dig in! 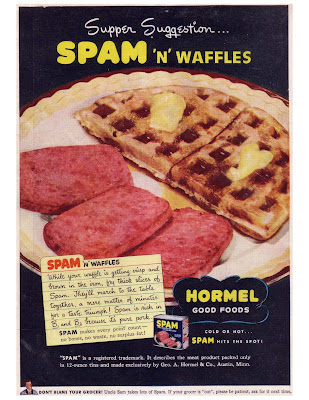 That is the most UN-appetizing spam & waffle ad... I would rather eat boots made out of licorice!

I was about ready to go eat my lunch and then that spam and waffle pic curbed my appetite. I may print that and stick it to the fridge as a dieting method.

I disdain Spam as much as or more than anyone on the planet, but Lysdexicuss....what the hell's so wrong with licorice boots???? It was good enough for Chaplin!!

You are a product of your parents, Jimbo. There's a whole generation of folks out there who crave Spam, Velveeta, Miracle Whip and Campbell's Cream of Mushroom Soup 'cause that's what Mom used to comfort them with.

I get a once-a-year craving for Underwood Deviled Ham, my-own-self. I'm seeking a support group.