Today marks the anniversary in 1933 of the original theatrical release of Walt Disney's Silly Symphony about The Three Little Pigs. 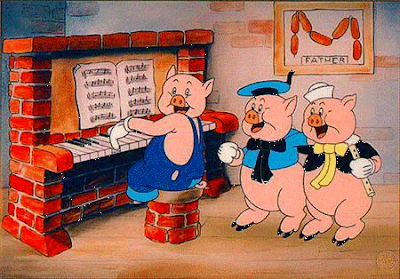 This was a seminal moment in Walt's career. He had previously hit it big commercially and critically with Mickey Mouse of course and made huge strides in developing story and animation and even adding color with his Silly Symphony series.

The Pigs, though...really made an impact.

Here was a Silly Symphony which didn't hit you over the head with technical innovations like some had done (though this one had a few too), the Pigs gave us leaps ahead in storytelling and characterization. A simple story which everyone already knew at the time, Walt and his team gave us all rock solid clear cut characters from the get go. We understand who each of the pigs is as well as The Big Bad Wolf.

And then there was that song.

Walt truly hit the big time here, and he didn't even need Elton John to do it. This cartoon became a sensation and this song a true phenomenon right out of the gate. These cartoons were usually released with the intention they would be in theatres for a week or maybe two and then never seen again. This one (at the request of theatre owners everywhere) was asked to be held over.

To the point where 6 months later, the short cartoon with it's catchy tune was being billed over whatever transient feature film was being shown.

As always, the weakest part of my blog is when I embed videos from other sources here, especially ones with copyrights held by watchdogs like the Disney Co. (remember my stance...there's a HUGE difference between Walt Disney and the disney co.) so I post these well knowing that they may be taken down without notice.

But for today...enjoy. And just TRY and get that damn song out of your head afterward. Not even with a crowbar people. I also post a few sequels to the cartoon which are solid as can be, but just didn't have the staying power of the original, which prompted Walt to quip as he moved on to other great ideas, "You can't top pigs with pigs."

A timely sidenote veering back to what else is in my head today: Guy Francis over at his blog "So, Cat Tacos?" apparently just bought himself a banjo and has been inspired to draw banjo playing pigs...there I said it. He's thrown the gauntlet down with his buddy Stacy Curtis from "Stacy Draws Stuff" in a banjo playing pig drawing showdown...there, I said it again. They've also called out for anyone else to play along that wants to.

I'm off to draw pigs playing banjos now...I'm getting used to saying it.

See y'all tomorrow.
Posted by Unca Jeffy at 9:14 AM