Will Eisner - The True Master of Comic Stroytelling 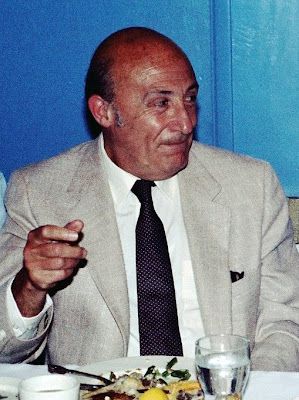 This man did more to establish common tools in great comic storytelling than anyone. The things that Eisner experimented with and perfected are tools all good comic storytellers employ to this day.

He innovated different formats as well. He and partner Jerry Iger were part of the very first wave of comics "packagers" that supplied content to comic book publishers in the 1930's and '40's, creating whole comics to Quality Comics. Characters like Plastic Man, Uncle Sam, Black Condor, The Ray, Blackhawk, Midnight, Firebrand, The Phantom Lady and Quality's entire stable of super hero titles (see more in my on-going "Slight History of the Golden Age of Comic Books: Super Heroes" series here in this blog) were all produced by the Eisner-Iger studios.

Artists from Lou Fine, Wally Wood, Frank Frazetta, Jules Feiffer, Jack Cole and the wonderful Mr. Eisner himself all cranked out genuine comic gold from this art house. All the while perfecting the storytelling tools created, designed and perfected from Eisner's own head. 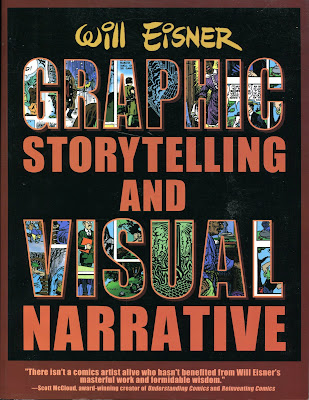 The way a story flows from panel to panel, framing of characters, use of negative space to highlight the main focal point, eye-catching splash pages, worms-eye and birds-eye angles to add depth, dimension and mood to the stories. Eisner was interested in and explored them all.
Some equate (Frank Miller for one) these techniques with making comics more cinematic...more like movies. In an indirect way they do, but Eisner was the first to point out that, while the tools are similar, comics should NOT imitate film. It is it's very own art form and should stand on it's own.
There are things comics can do that no other narrative art form can. And it's that uniqueness that MAKES it an art-form.

Eisner's passion for Comic Art or Sequential Art as he dubbed it, kept him a vital contributor to the art form from the 1930's right up to his death in 2005. He never lost that passion for telling great stories and for finding new ways of telling them.
He was also a savvy businessman who found new and different venues to ply his trade.
While working hard at supplying comic stories to comic books, someone came to him with the idea of supplying a comic BOOK supplement to the Sunday Newspaper.
That's right! Right there in the center of your regular Sunday funnies, was a comic BOOK.
Eisner was asked to create a masked crime fighter to star in these inserts. Eisner eschewed the idea of a super-powered character, and created "The Spirit". I'll get more into who the Spirit was in my aforementioned "History" series, but WHAT The Spirit supplement was, was a beautiful experiment in comic literature.
Each and every week from June 2, 1940-sometime in 1952, The Spirit showed up at your doorstep with a 7 page gem of a story. They started out as standard comic book detective story fare, but soon evolved into tiny human dramas and comedies the like which had never been seen in comic book form.
Here's a sample from about the middle of the run. Part of me would love to make the Sunday posts of my blog a Sunday Funnies kind of thing wherein I would post some great comic strips. If nothing else, this would afford me an excuse to revisit so many of these great treasures of four-color-on-newsprint. 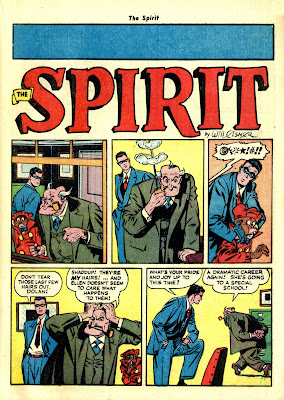 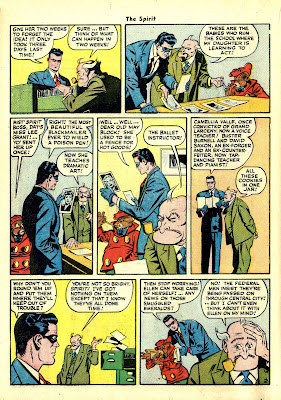 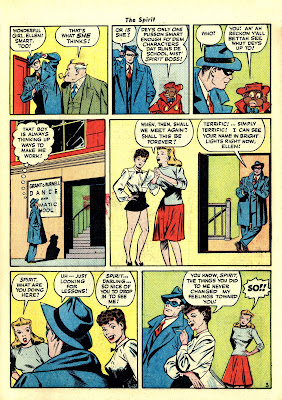 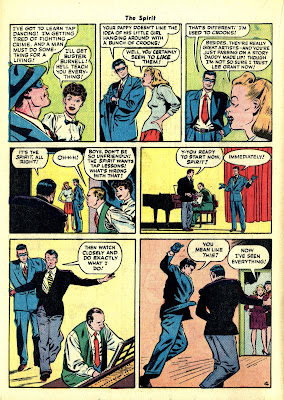 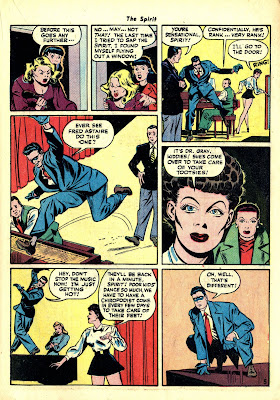 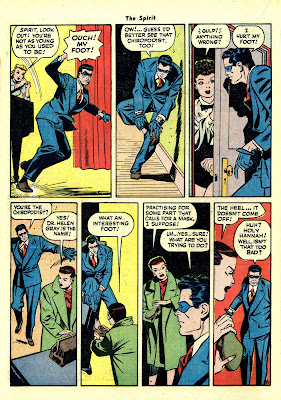 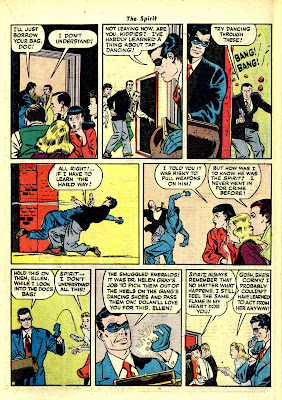 Another venue Eisner explored from the 1940's-60's, was a military manual distributed through the armed forces. The was called PS magazine and was a monthly that gave training exercises and conduct hints to American soldiers stationed around the globe.
An every man character that the boys in uniform could relate to (like Private SNAFU mentioned in my Dr. Seuss blog post) was Joe Dope. Here's a little sample of Eisner's work there: 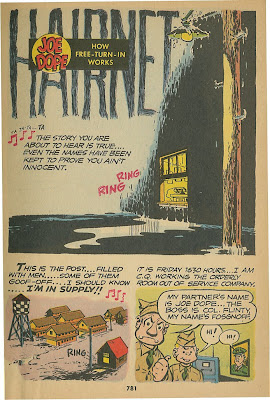 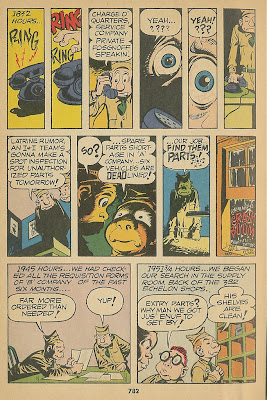 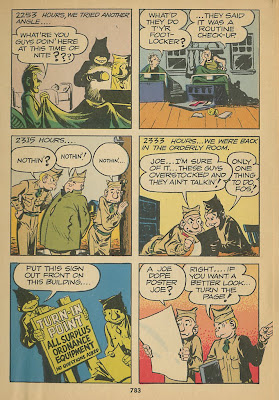 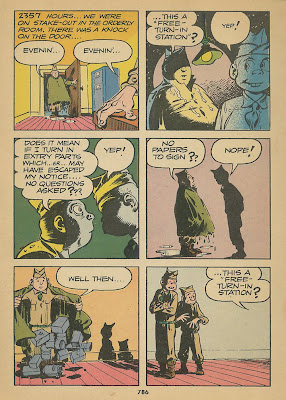 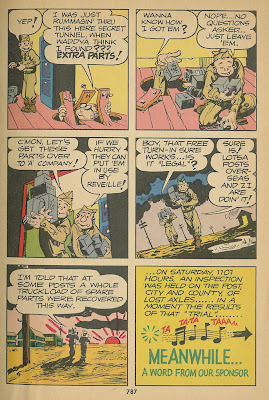 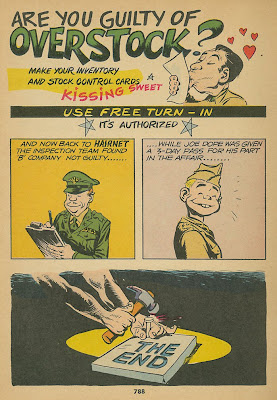 As the comic book fan market expanded and matured in the 1970's and into the '80's and 90's with the emergence of the direct sales market, Eisner decided to take a tip from the Europeans.
Europeans (who have a much wider and accepted view of comics than we small-minded Americans) had nurtured a format known as "The Graphic Novel". Already having a broader scope than Americans Super-Hero-centric comics, they liked comic stories which dealt in a wide spectrum of subject matter. Humor comics and Human-Interest comedy and drama were and are widely covered and they had delved into a format much more open than out standard 32 page-monthly on-going title format.
A graphic novel could deal with anything. And be as many pages as it needed to be. And didn't have to be serialized. It could introduce characters, tell it's story and be done.
Just like every other type of storytelling.
Eisner pioneered that brand in America, and no one did it better. They still don't.
His first was "A Contract with God", the story of an old Jew who was coming to grips with his own mortality, his faith and his place with the world. Viewing his life by the allegory of the cockroach stranded trapped on his back desperately trying to turn upright, the story is one of instant recognition by the reader and one of frustration and hope at the same time. 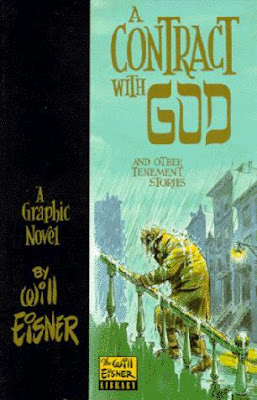 This and many more of Eisner's more post modern stories told in graphic novel form can be found at his web site here. Maybe I'll post some of his short stories here at another time, but I encourage you to check them out for yourself.

Here's my little bit of memorabilia from the man himself. In 1994 I attended the San Diego Comic Con. Every year there they have a ceremony announcing winners of "The Eisner Awards". Kind of a comic book Oscar. I lucked into sitting directly behind Mr. Eisner and got his autograph on my program. 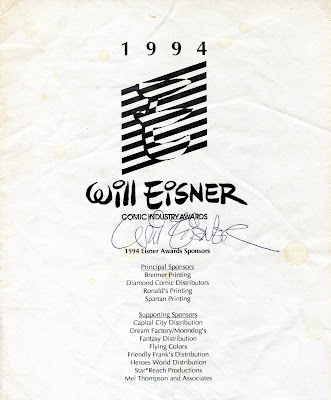 I'm very proud I got to shake the man's hand.
I'm going to leave you now to discover more Will Eisner treasures on your own, but first here's a cool little interview with the professor himself! 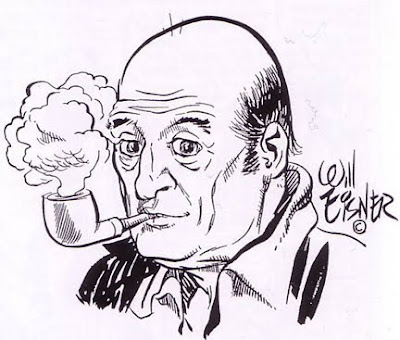 Thanks Will! For producing some of the most vital and relevant work in comics and for never forgetting, or letting US forget that this is an art.
Posted by Unca Jeffy at 11:36 AM