Is I firmly stand at middle age (49 and rising) and am just learning to do the things I should have done when I was a boy, I continue with my sketchbook.

I think when I first pick up a clean sketchbook, I try and emulate what I've seen other people do when they draw.  NOT copy what they draw or the style in which they dray it, but the sketchy/draw over things style that is very foreign to the way the process works for me.  I try and work looser like the way I see "rough sketches" from artists look.

I've spent a lifetime drawing straight in ink though, and worked at a cartooning style that appealed to me...one that seemed spontaneous and unplanned...illusional improv in cartoons.

So when I see me being sketchy in a sketchbook it right away feels false.  I gotta stop doing that.  If the sketchbook isn't true to the person filling it, then what is.

Here's a few animals.  The zebra started as examining a simplistic style and I liked it, so I proceeded to the elephant and I liked that a lot.  Then I drew the tiger and it all looked wrong...too short a snout/muzzle.  Then I grazed my pen against the page and made a line that sullied the remaining blank white space.  The line looked like the top of the spectre's cowl, so I finished it.  success...I reached the flowing sub-conscious, if only for a second. 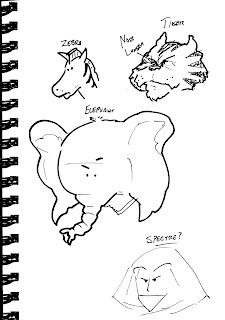 I wondered what an ant would look like leaning on a bar.  All six appendages having to find a slumpen home.  Then I thought I'd draw a woman from a rear 3/4 view, because I think girl's butts are cute...the face turned into one of those sketchy things I don't like, but I knew if I drew just a headless butt, I'd be picked out as a perv.  Then I drew a circle and charlie Brown wanted to get out. 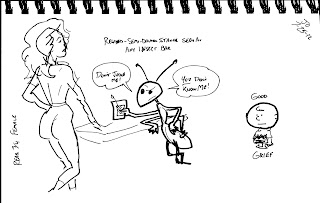 I thought pulling a random common noun generator up on the Internet would give me some words that would make me draw out of my comfort zone.  All it did was make me skip over words I didn't want to draw.  Then I got to "breakfast" and got hungry.  I also thought I'd work on my sloppy lettering and filled up the page...my depression-era parents would be proud of me for not wasting.  I think it reined my eggs though. 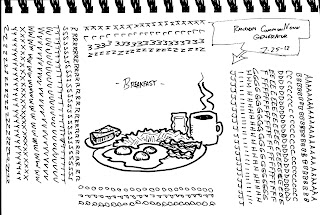 Thanks so much for the encouraging comments yesterday on my thoughts and use of sketchbookery.  I know working out ideas on paper instead of in my head would be good, I wasn't confident in what I was doing for sure until I got some input.

Thanks for validating me, outside world! - Maybe that's another issue.

Talk to you soon.

I like how Charlie Brown, if he had a little facial hair, would look just like you.

Unca Jeff, I love where you're going with this train o' thought, and I gotta tell ya, the elefrump is perfection! It's recognizable as your style, he has personality, yet perfectly elephonty. Great cartoonists, such as Kelly, can take HUGE things and make them comfortable in small spaces. You're doing that Bud.

And the ant is uber cool too!

Marco: There's more than just skin-deep resemblance between Me and ol' Chuck Brown.

Thomas: Appreciate the compliments VERY much. If I can do things that equate to the charms of my heroes talents yet not copy (i.e. your Kelly analogy), then I have truly done what I've set out tod o!